Painter, illustrator and teacher, born near Cambridge. Studied art at St John's Wood Art Schools, 1935-8, under Patrick Millard and Kenneth Martin. During the following year he stayed in Paris, where French Neo-Romantic painting made a strong impression. Was a conscientious objector during World War II. Designer for John Gielgud's production of Macbeth, 1941. Shared a studio with Robert Colquhoun and Robert MacBryde, 1943-6, and with Keith Vaughan, 1946-52, which reinforced his association with the English Neo-Romantic movement. From 1943-6 Minton taught at Camberwell School of Arts and Crafts, at the Central School of Arts and Crafts, 1946-8, and at Royal College of Art, 1948-57. He was a popular, charismatic teacher and personality, who in later years continued to be a cult figure. Minton's work has an assured linear quality, seen in his illustrations to Alain-Fournier's The Wanderer and a number of other books. He also painted on a large scale with a distinctive palette, work stemming from travels  in Corsica, Spain, the West Indies and Morocco in the late 1940s and early 1950s. Minton ehibited at the RA, LG, RBA and Lefevre Gallery in 1945. Lived in London and committed suicide. Arts Council memorial exhibition, London and touring, 1958-9, with retrospectives at Reading Museum & Art Gallery, 1974, Oriel 31, Newtown, 1993, and Royal College of Art, 1994, and tour. 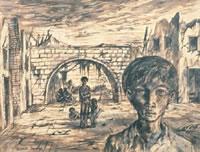