Milner was an Abstract and Surrealist painter,  born in Castleford, Yorkshire. He attended the local Grammar School, where his Art teacher also taught Henry Moore. He went to Leeds College of Art and then the Royal College of Art. He exhibited in 1932 at the Mayor Gallery, having a portrait bought by the artist Edward Wadsworth. In the Second World War he served in the Royal Navy. He exhibited in mixed exhibitions at the Redfern Gallery and Gimpel Fils and had solo shows including E.L.T.Mesens’ London Gallery in 1949 and Woodstock in 1967. Salford Art Gallery bought an oil, Abstraction, in 1956. Milner settled in Ramsey, Isle of Mann where he was the founder member and became vice-president of the Mannin Art Group where he was a prolific exhibitor. The Manx Museum, in Douglas, holds an abstract water colour and a Manx landscape by Milner. The artist was described by one friend as a stout bohemian fellow, competent with brush and corkscrew 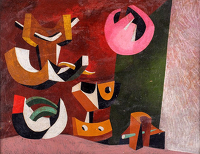