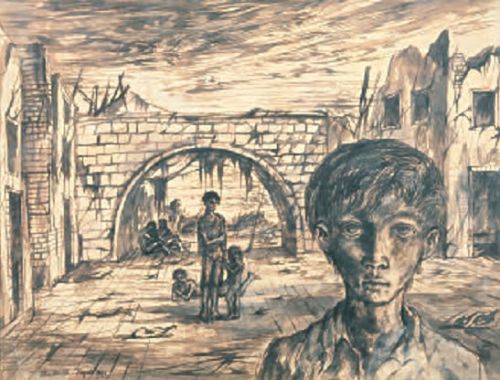 This image is closely related to two paintings in the collection of the Imperial War Museum, Blitzed City with Self-Portrait (IWM ART 16739) and wapping (IWM ART 17174). Each of the three pictures include a youthful, melancholic self-portrait set against a backdrop of bomb-damaged buildings.This series of paintings, all dating to 1941, were an expression of Minton’s own anxiety about his imminent conscription; his claim to be a conscientious objector was rejected, and he joined the Pioneer Corps in December 1941.

The German bombing campaign had devastated those areas along theThames that Minton liked to frequent –Wapping, Limehouse and Poplar .War had created a type of landscape that had previously existed only in his imagination.