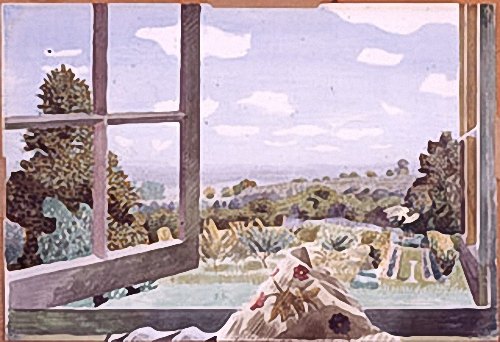 
From 1941 to 1947 Rowntree lived in Great Bardfield, near Saffron Walden, Essex. During this period he largely worked on the ‘Recording Britain’ project – a scheme devised in 1939 to make a pictorial record of Britain before the anticipated destruction of the imminent war. John Piper once described Rowntree as always having ‘an eye for things in the countryside… that needed noticing, and had, to date, been little noticed’ (quoted in The Times obituary, 24th February 1996). The influence of Edward Bawden (who lived at Saffron Walden), and the remarkable circle of artists around him, situates Rowntree’s work in one of the most attractive periods of landscape painting in Britain in the twentieth century.