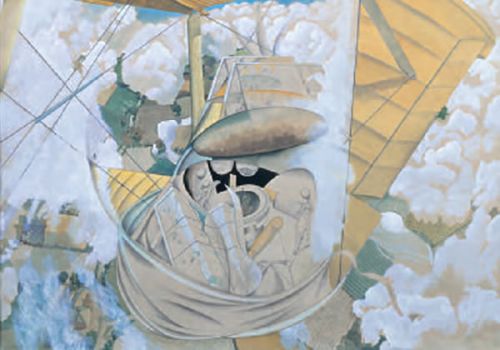 The aircraft depicted is a De Havilland DH82Tiger Moth, painted in the normal yellow livery for training aircraft.The biplane was designed in the 1930s by Geoffrey de Havilland and was operated by the Royal Air Force and others as a primary trainer .The painting is inscribed on the back ‘EFTS Cambridge’, which must refer to the Elementary FlyingTraining School, no. 22, which was stationed in Cambridge in 1941.

During the SecondWorldWar, Stevenson served as a squadron leader and pilot in the Royal Air Force. In addition to being a painter , he was also a sculptor and print-maker – disciplines that clearly heightened his ability to convey space. The Cockpit has much of the compositional dynamism of Nevinson’s iconic lithograph Banking at 4000 Feet, 1917.