The remarkable work of John McKenzie has only recently come to light.
Despite exhibiting his slates at the Royal Scottish Academy Summer
Exhibition, the Royal Glasgow Institute of Fine Arts, and The Arbroath
Art Society, (and in two solo exhibitions at the Arbroath Public Library),
McKenzie sold no more than a handful of sculptures during his lifetime.

Initially McKenzie worked in wood, but disappointed with the results, he turned to roof slates and other materials found to hand. Mckenzie accentuated the depth of his shallow designs by polishing them with linseed oil mixed with slate dust. The works have retained their original presentation _ the wall plaques with a narrow oak moulding and the free standing reliefs set onto angled stands with bronze coloured resin set around the asymmetrical edges.

He produced no more than three to four reliefs a year, which amounted to less than one hundred and fifty over his entire career. By day a charge-hand mess-man on HMS Condor (and later a railwayman), the reclusive McKenzie indulged his passion for carving by night and at the weekends. Inspired by Antiquity and his own system of recurrent motifs, he found it entirely natural to add into his compostions figures in contemporary dress.
A rich symbolism imbues his work, complemented by lyrical titles such as ‘Lightsome Interlude’, ‘Fruitful Tree’ or ‘Moon Shot’. When McKenzie died, in 1972, his estate was left to his housekeeper. A type written inventory lists 112 works of art. The twenty-seven works selected for this catalogue include some of McKenzie’s finest designs. Paul Liss, July 2012

It is rare for a creative artist to work in the privacy of his garden shed, in a challenging medium, and almost entirely for his own pleasure, but such a one was the slate-carver, John McKenzie. His day job was working as a steward in the Petty Officers’ Mess aboard H.M.S. Condor, the Fleet Air Arm Training School at Arbroath, Angus, on the east coast of Scotland. It has been said that sculptors can be divided into two categories - whittlers and modellers.
McKenzie definitely falls into the former, as he was clearly never happier than with a knife or some other cutting or engraving tool in his hand; rejecting wood as too soft, perhaps too feminine, he sought for something more challenging and settled on Welsh slate, a hard and obdurate material. The small body of work he produced, probably not more than a hundred and fifty pieces in total, form a unique record of the dreams as well as the everyday genteel world of this working-class Phidias from Glasgow who, after his father’s death, moved to Arbroath with his mother, living with her for the remainder of her life.

His reliefs are, in many ways, like three-dimensional drawings, and it is not surprising to read in that rare interview he gave to The Arbroath Herald that he kept on ‘drawing, and redrawing, till what I’ve produced simply asks to be carved.’ These low-cut slate reliefs have all the modulation and shading of an obsessive and perfectionist draughtsman, the sort who draws and redraws until the paper is lacerated.
There is also an affinity between the two materials - graphite and slate. McKenzie’s work is totally unpretentious, but it reveals a cultivated familiarity with the carvings of ancient Babylon and Mesopotamia, as well as classical mythology, suggesting that as a boy he had haunted Kelvingrove Art Gallery - and may have continued to do so - as well the public libraries of Glasgow and Arbroath.

His father may have been a railwayman and his mother in domestic service, as the records tell us, but they would also have attended the kirk or chapel and probably read the works of Ruskin and Morris, and possibly of Carlyle too. Such sources are an inherent part of his natural vocabulary, a heritage with which he was both familiar and comfortable, and which he exploited in his small plaques, not as an antiquarian, but rather as an observant, though detached, onlooker.There is something puritanical in his approach, even when treating the female nude, which links his vision of everyday life to that of the Quaker tempera painter, Joseph Southall. The mediums of both slate-carving and tempera are rooted in antiquity, demanding, equally, a disciplined technique and eschewal of the hasty or ill-considered.
There is also, of course, an affinity with some of Eric Gill’s relief carvings; McKenzie never has the overcharged sense of Gill, but many of his reliefs share qualities with the Stations of the Cross in Westminster Cathedral - considered by some to have been Gill’s finest achievement - and the Leeds University War Memorial, particularly the low depth of field, the simple, clear outlines and the stasis. That sense of stillness even in motion - not to be confused with stiltedness - the sense that the scene, whether contemporary or quasi-mythological, is frozen in time. The use of oil colour too, such as Gill used in his 1914 carving Boxers, provides another link between the two men.
A list of the hundred and twelve carvings that were still in his possession at the time of his death exists, but forty years on we will never know what books he had on his shelves, what postcards, photographs and cuttings from the local paper, what references he used. John McKenzie may have worked in solitude but it is clear that he did not work in isolation.

To read the full text, download the catalogue here. 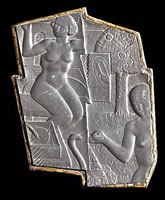 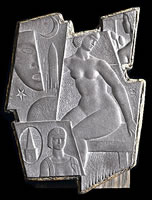