Born in London he studied at the Eastbourne School of Art and at The Royal College of Art under Paul Nash, where Edward Bawden became a close friend. Initially a muralist (none of which has survived), he became widely known for his luminous watercolours, woodcuts, lithographs – notably his High Street Shops executed by the Curwen Press, (published by Country Life in 1938 in a book with a text by JM Richards, husband of Peggy Angus), ceramics for Wedgewood and graphics for London Transport, as well as glass and furniture design. Much inspired by the South Downs in East Sussex, he was a frequent visitor to Furlongs, the cottage of the artist Peggy Angus. In 1930 he married fellow artist ‘Tirzah’ Garwood, they then moved to rural Essex, at first sharing a house with the Bawdens. An official World War II artist and with a commission with the Royal Marines, he died while with an RAF air sea rescue mission to Iceland. His works are in the collections of numerous British museums and art galleries, the largest holding is at the Towner Gallery, Eastbourne. 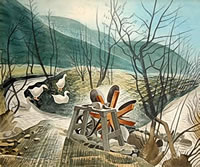