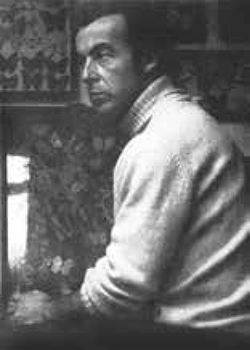 The highly distinctive large scale watercolours of David Evans  have  much in common with those of Edward Burra, who, twenty four years his senior and much admired by Evans, was clearly an important influence.  Painting the landscape of his native Suffolk, where he settled (near Woodbridge) in 1969, his brightly coloured compositions, which typically measure 30 x 50 inches, fused his local habitat with vivid fantasies inspired by imagery from contemporary life.

He was a ardent campaigner and environmentalist and the effects of pollution in the form  of landfill, industrial plants and roads encroaching into his landscape are regular motifs.  He was also drawn to metropolitan subjects - rock bands, cafeterias, excursions to museums and days out to the beach.

Born in London. he studied at Central School of Arts and Crafts with Keith Vaughan. Early in his career he showed photomontages at Gallery One and gained several commissions; these included a design for the Hollywood Room in the Observer Film Exhibition, 1956, and a mural for the Soup Kitchen, Knightsbridge.  His characteristic large-scale watercolours and gouaches date from 1967 onwards.  They were first shown in public in 1973, when his work was included in a mixed show at Deben Gallery, Woodbridge. In 1975 his work was included in summer show at Redfern Gallery, which resulted in a series of highly successful solo exhibitions at Redfern in 1979, 1981, 1983, 1984, 1986 and a memorial show in 1988. He also had one-man shows at McMur­ray Gallery from 1976-8. In 1981 he was the subject of an Anglia ITV folio documentary. In his pre-1970 London years David ran his own specialist classical record shop in the Brompton Road, and in spite of his later success, he worked in his final years as a porter at a local psychiatric hospital.  In the winter months he often found it hard to paint because the light conditions were too dull. He died at the age of 59 in a road accident. A memorial exhibition was held at Redfern in 1988.

The recent discovery of a unique group of pictures by Evans, which remained in his studio, unseen for several decades,  has allowed the opportunity to curate the first ever full retrospective, (to take place in 2017).

The exhibition will be accompanied by a 240 page book, reproducing for the first time over 100 works spanning his entire career.  The introduction will be written by the musician Pete Gage, a friend of Evans best known as the  vocalist from the pop group Dr Feelgood.