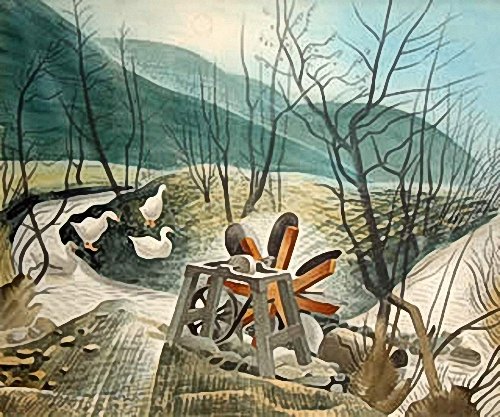 Ravillious refers to this watercolour in a letter to Helen Binyon dated 9 March 1938, written from Capel-y-Ffin in the Black Mountains: 'Up to Saturday there had been two more or less fine days and since then we have basked in the sun. It is like May. And I work simply all day trying to make up for lost time and bad drawings, with much better results. A water wheel (homemade by the son of the farmer out of chunks of wood and the bottoms of petrol tins) is now almost finished and looks rather well: and a bit Chinese; there are also four geese in the picture and the time is eight in the morning. Vanity won't allow me not to mention this.'